The Metaphysics of Sound: Meta Tones

Since the beginnings of recorded sound in the late 19th century, technology has enabled people to rearrange the normal listening experience. With the advent of easily editable magnetic tape in the 1940s and 1950s and the subsequent development of multitrack recording, such alterations became more common. In those decades the experimental genre of musique concrète used tape manipulation to create sound compositions. Less artistically lofty edits produced medleys or novelty recordings of various types. In the 1950s, painter and writer Brion Gysin accidentally developed the cut-up method. He had placed layers of newspapers as a mat to protect a tabletop from being scratched while he cut papers with a razor blade. Upon cutting through the newspapers, Gysin noticed that the sliced layers offered interesting juxtapositions of text and image.

He began deliberately cutting newspaper articles into sections, which he randomly rearranged. The book “Minutes to Go” resulted from his initial cut-up experiment: unedited and unchanged cut-ups which emerged as coherent and meaningful prose. South African poet Sinclair Beiles also used this technique and co-authored Minutes To Go. Gysin introduced Burroughs to the technique at the Beat Hotel. The pair later applied the technique to printed media and audio recordings in an effort to decode the material’s implicit content, hypothesizing that such a technique could be used to discover the true meaning of a given text.

The cut-up technique (or découpé in French) is an aleatory literary technique in which a written text is cut up and rearranged to create a new text. The concept can be traced to at least the Dadaists of the 1920s, but was popularized in the late 1950s and early 1960s by writer William S. Burroughs, and has since been used in a wide variety of contexts. Burrough’s experiments with language gave birth to the earliest forms of remixing, combining, and transforming existing materials to create something new. As an experimental technique, the cut-up method as applied by William Burroughs in his work from the late 1950s onwards already had a rich history. The cutting together of pre-existing material into radical juxtapositions closely followed the development of a mass culture that had been busily recording itself in photography, newsprint, and sound since the start of the 20th Century.* 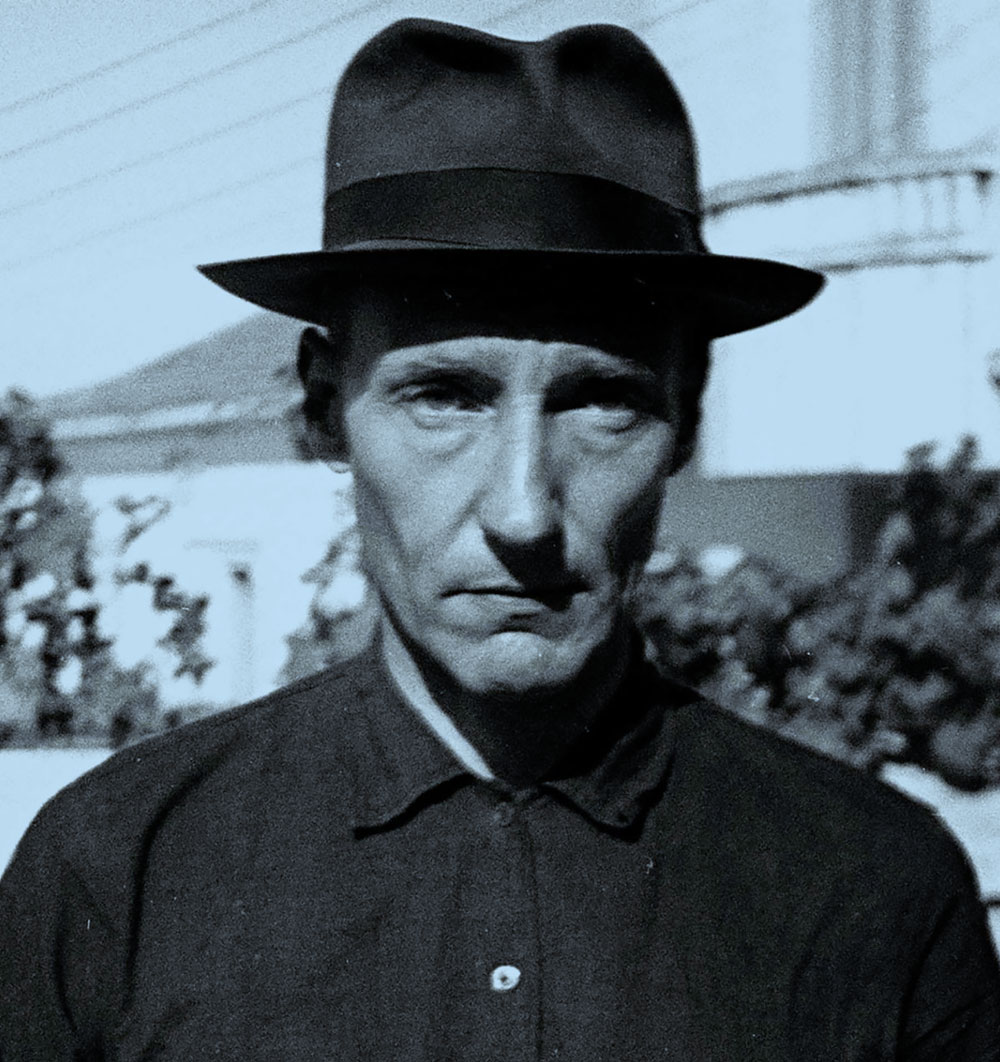 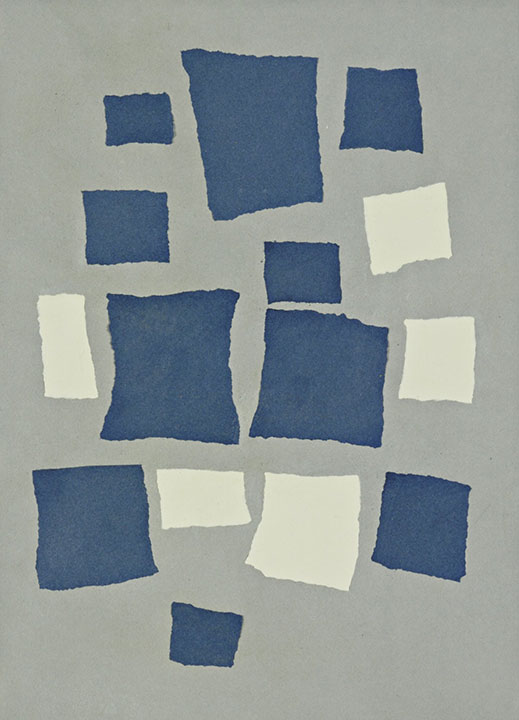 Illustration: Jean (Hans) Arp
Untitled (Collage with Squares Arranged according to the Law of Chance)-1916–17

Creating according to the Law of Chance

Jean Arp and other Dada artists embraced chance as a tool for liberating creativity from rational thought. An account by his friend and fellow artist Hans Richter describes how Arp created the “Chance Collages” like this one. Frustrated with a drawing he had been working on for some time, Arp finally tore it up and let the pieces flutter to the floor of his studio. Sometime later he happened to notice these same scraps of paper as they lay on the floor and was struck by the pattern they formed. It had all the expressive power that he had tried in vain to achieve.

Chance movements of his hand and the fluttering scraps of paper had achieved what all his efforts had failed to achieve, namely expression. He accepted this challenge from chance as a decision of fate and carefully pasted the scraps down in the pattern which chance had determined.

To remove his artistic intervention even further, Arp sometimes used a paper cutter to cut the squares rather than tearing them by hand. While chance was undoubtedly the point of departure for this and other works in the series According to the Laws of Chance, the relatively ordered appearance of Arp’s collages suggest he did not fully relinquish control.

Probabilities and Possibilities: The logic of impossibility

The 9 Beet Stretch 2.0 is Aleatoric music. The term Aleatoric was popularized by the musical composer, Pierre Boulez, for compositions resulting from “actions made by chance”, with its etymology deriving from alea, the Latin word for “dice”. It now applies more broadly to art created as a result of such a chance-determined process.  The term was first used in the context of electro-acoustics and information theory to describe sound events that are determined in its framework and flexible in detail”, by Belgian-German physicist, acoustician, and information theorist Werner Meyer-Eppler.

In practical application, in compositions by Mozart and Kirnberger, for instance, the order of the measures of a musical piece was left to be determined by throwing dice, and in performances of music by Pousseur (e.g., Répons pour sept musiciens, 1960), musicians threw dice “for sheets of music and cues”. However, more generally in musical contexts, the term has had varying meanings as it was applied by various composers, and so a single, clear definition for aleatory music is defied. Aleatory should not be confused with either indeterminacy or improvisation. The various movements that make the 9 Beet Stretch 2.0 Meta Tones rely on probabilities and possibilities to create sounds not achievable with careful planning.

According to Richard Jeffrey, “Before the middle of the seventeenth century, the term ‘probable’ (Latin probabilis) meant approvable and was applied in that sense, univocally, to opinion and to action. Al-Kindi’s Book of Cryptographic Messages contains the earliest known use of statistical inference (9th century) The earliest known forms of probability and statistics were developed by Middle Eastern mathematicians studying cryptography between the 8th and 13th centuries. David Colton’s 2019 Ph.D. thesis, ″Canned Chance, The commodification of aleatory art practice″ argues that the term aleatory is now used to describe any artwork that uses chance in its creation. He suggests that there are subtle differences between work that has been made using chance in the creative process, and work that instead pushes one into chance encounters and situations.

Did you imagine these shapes before composing the soundtrack? Or after?

I started my work with the images, which, moreover, at first, were not animated. These images come from a mathematical algorithm that I discovered by chance, without suspecting that it would contain so much graphic potential. Mathematics very often has this propensity to generate very rich, very varied, and above all very unexpected forms. Who can remain insensitive to fractal objects, and in particular that of the Mandelbrot set? Likewise, my mathematical model, although having an almost childish formulation, very quickly showed itself to be the bearer of this great diversity of forms. And, to answer your question, the music came much later.

What is the relationship between your soundtrack and your animations?

When my images revealed such diversity, it quickly made me think of the principle of emergence, which seems to hold in many fields, and not just in science. This principle was first formulated by Aristotle, who said: “The Whole is more than the sum of its parts”. It’s a principle that comes to light when the way we look at things changes scale. The whole universe seems to organize itself according to this principle. We will probably never be able to verify that, but I like to think that it could be. And so, my forms strongly appeal to me on these emerging issues. Questions that are found everywhere in cosmology. Hence my search for music that is in the same spirit, that of a cosmic expression in close relation with its constituents … “We are stardust”, as Hubert Reeves says so well! This is such a rich thought, carrying so many promises!

Is everything in these animations planned specifically or are there elements or “coincidences” that mean things are happening that were not planned?

What I love and cultivate most of all in my work is its experimental aspect. Not in the scientific sense where experiments are always subject to very precise protocols and where chance and the unforeseen are rather frowned upon. My experiment is infinitely more fanciful. I try to free myself from the prejudices which, even before doing something, give you ready-made answers straight away, and which are almost always poor, in any case sterile. I find much more interest in the issues than in the answers that flow from them, because the former open the doors wide, while the latter often close them. So obviously my work on these animations was marked almost exclusively by trial and error and the unexpected, which I experienced with the same glee as a child. However, some mathematical tools, which unfortunately I do not know, would certainly allow me to go further. But mathematics also has its limits!

What do you think of the carefully planned creation Vs Experimentation?

I think creation can, in a way, temporarily help with planning. But, in a way, that is both temporary and light. Temporary: when you want to cross a river, a boat can be useful. But once on the other side of the shore, the boat is useless. It is then essential to get rid of it. Ditto for planning. Light: if you are too perfectionist, or too demanding, then this is not a boat you want to use, but a submarine or maybe even an aircraft carrier! You will then, of course, have no chance of having your expectations met. And so you will never cross a stream. I previously talked about mathematics. They do provide, to some extent, a form of planning for solving problems. But the greatest mathematicians have always advanced knowledge by bypassing this planning approach. This enabled them to chart new routes. I am firmly convinced that the same goes for the creative process … Chance will always contain this famous creative potential!

What do you think as an artist about the juxtaposition-fusion of classical and electronic music?

Until now, music has been practiced as if it were an occult art. Music composition was the exclusive domain of the experts. Digital equipment, self-made instruments, and new technologies are making it possible for musicians and non-musicians alike to expand and push the boundaries of music by creating something new and unexpected. It’s freedom of expression in its purest form.”